1. Derivation of the Experimental Model​

Disk A mounted on the machine 10.0.0.1 is full, and the service is unavailable. The slow execution of B Dubbo services on all nodes delays the call of upstream A Dubbo services, resulting in slow user access. All CPU cores on node B in Kubernetes cluster A are fully utilized, resulting in abnormal pod scheduling in cluster A. The network of pod D in the Kubernetes cluster C is abnormal, which causes access exceptions in the service related to D. We can use the following sentence to describe the failure: A certain component on a certain machine (or resources in the cluster, such as node and pod) failed, which caused the related impact. We can also view the fault detail by splitting the description, as shown in the following figure:

These four parts can be used to describe the existing fault scenario. Therefore, we have abstracted a fault scenario model, also known as the chaos experimental model. 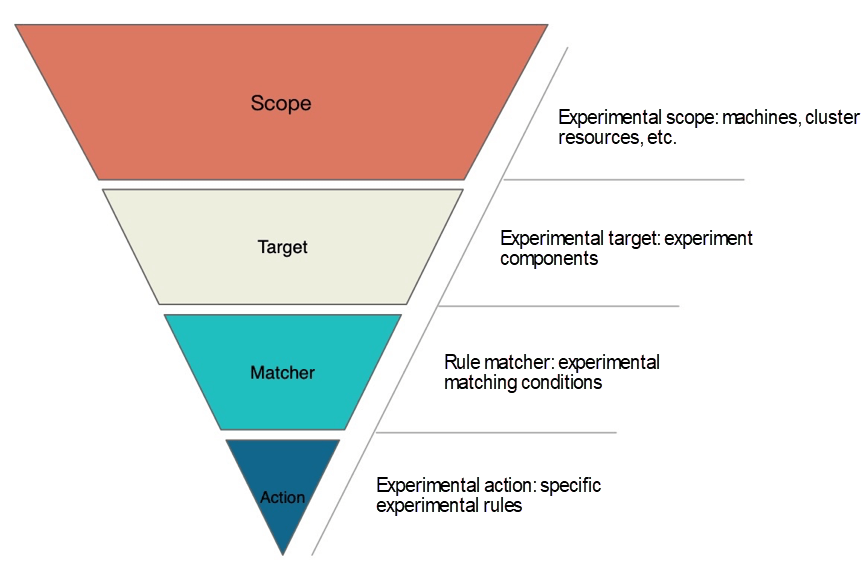 2. An Introduction to the Experimental Model​

This experimental model is described in detail below:

-Scope: The scope of the experiment refers to the machines, clusters, and resources involved in the experiment. Target: The experimental target refers to the component that bears the experiment. This includes CPU, network, and disk in basic resource scenarios, application components in Java scenarios, such as Dubbo, Redis, RocketMQ, and JVM, and Node, Pod, and the Container itself in container scenarios. -Matcher: The experiment rule matcher defines relevant experiment matching rules based on the configured Target. You can configure multiple matchers. Each Target may have its own special matching conditions. For example, Dubbo and gRPC in the RPC field can be matched according to the services provided by the service provider and the services called by the service consumer. Redis in the cache field can be matched according to set and get operations. You can also extend the matcher, such as extending the experiment scenario execution strategy and controlling the experiment trigger time. -Action: These are the specific scenarios of an experimental simulation. If the Target is different, the implementation scenarios are also different. For example, disks can simulate scenarios, such as full disk, high disk I/O, or disk hardware failure. Applications can abstract experimental scenarios, such as latency, exceptions, return of specified values (such as error codes and large objects), parameter tampering, and repeated calls. For container services, we can simulate Node, Pod, Container resource exceptions, or basic resource exceptions. This model can answer the following questions that need to be clarified in implementing chaos experiments:

3. The Significance of the Experimental Model​

The model has the following features:

This model has the following meanings:

4. Application of the Experimental Model​

The application of the chaos experimental model is summarized below:

The following section focuses on ChaosBlade, a chaos engineering tool implemented based on this model.

In the beginning, Alibaba introduced chaos engineering to solve the dependency problem of microservices. Later, chaos engineering was used to verify the steady state of business services and cloud services. Then, it was used to guarantee the business continuity of public cloud and private cloud and verify the stability of cloud-native systems. Alibaba has accumulated rich scenarios and practical experience. At that time, the open-source tools related to chaos engineering had problems, such as scattered scenario capabilities, difficulty getting started, lack of experimental model standards, and difficulty expanding and accumulating scenarios. These problems make it difficult to realize platformization, and it is difficult to include these tools on one platform. Therefore, the execution tool ChaosBlade of chaos engineering experiment was opened. The section below describes it in detail through scenarios, usage methods, architecture design, and examples.

ChaosBlade is a tool that can be used by downloading and decompressing directly. It does not need to be installed. The calling mode it supports includes a CLI mode that directly executes blade commands.

For example, in the figure above about network latency, if you add the -h parameter, you can see a very perfect command prompt. For instance, if I want to call port 9520 to experiment on network packet loss and align the previous experimental model, its target is network, its action is packet loss, and its matcher is to call the remote service port 9520. After successful execution, the experimental results will be returned. Each experimental scenario is regarded as an object, and it will return the UID. This UID is used for subsequent experimental management, such as destroying and querying experiments. To destroy the experiment, that is, to restore the experiment, execute the blade destroy command.

Another way to call ChaosBlade is Web mode, which exposes HTTP services by executing server commands. At the upper level, if you build your chaos experimental platform, you can call ChaosBlade directly through HTTP requests. 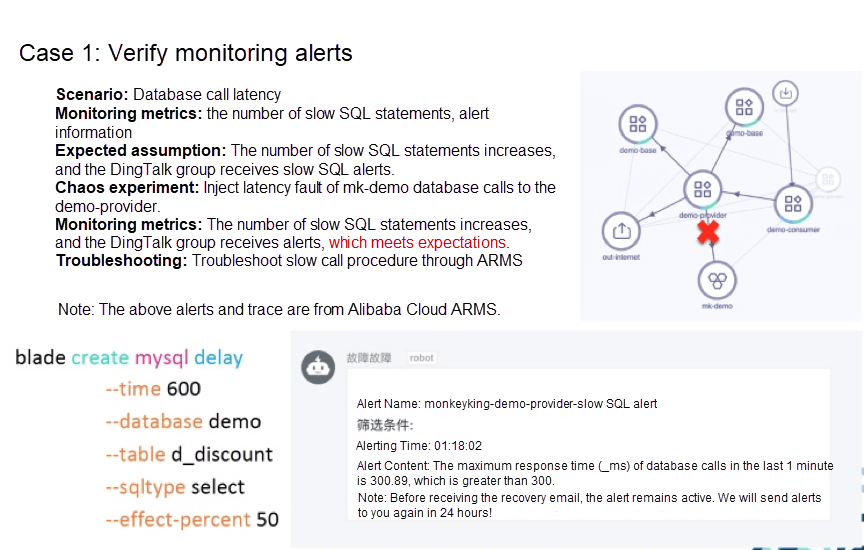 The experimental scenario of this example is database call delay. First, we define the monitoring metrics: the number of slow SQL statements and alert information. The expected assumption: the number of slow SQL statements increases, and the DingTalk group receives slow SQL alerts. Next, perform the experiment. We use chaosblade directly. You can look at the lower left part of the figure above. When we inject the calls of MySQL query for demo-provider, if the database is demo and the table name is d_discount, 50% of query operations will be delayed by 600 milliseconds. 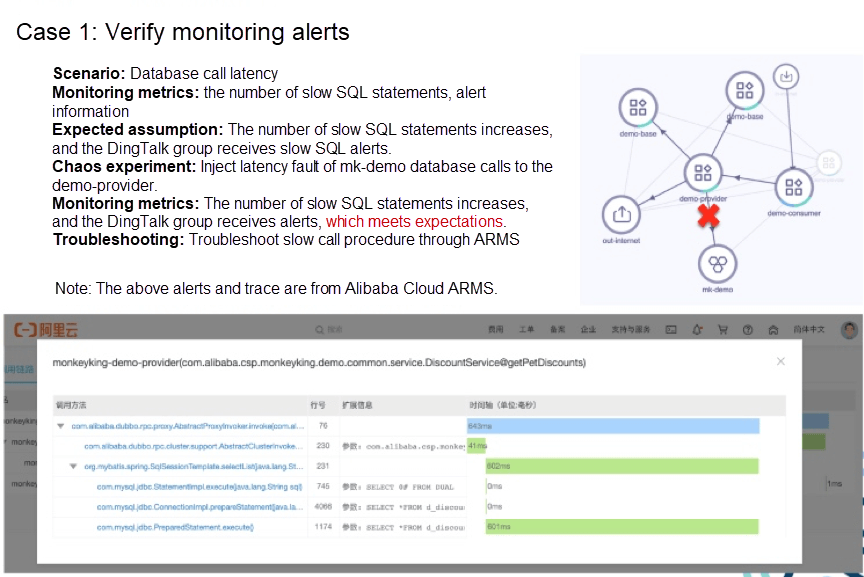 We use Alibaba Cloud ARMS for monitoring and alerting. As you can see, the DingTalk group receives an alert soon after performing the chaos experiment. The effect meets the expectation by comparing it with the monitoring metrics defined earlier. However, it should be noted that the results from this instance does not mean it will meet the expectation in the future, so continuous verification by chaos engineering is needed. If slow SQL statements occur, ARMS tracing analysis can be used to troubleshoot and locate them. You can see which statement is slow in execution. 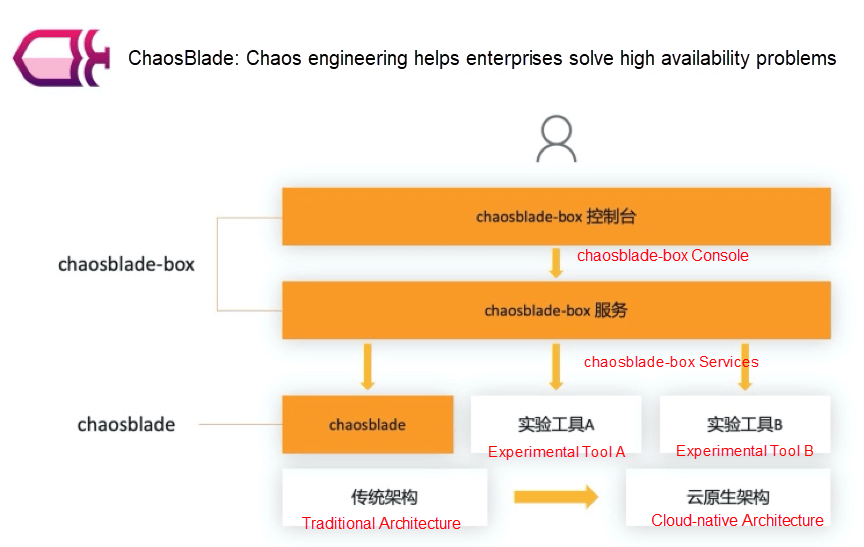 The following section describes chaosblade-box through its features, architecture design, and use cases.

It has the following features: 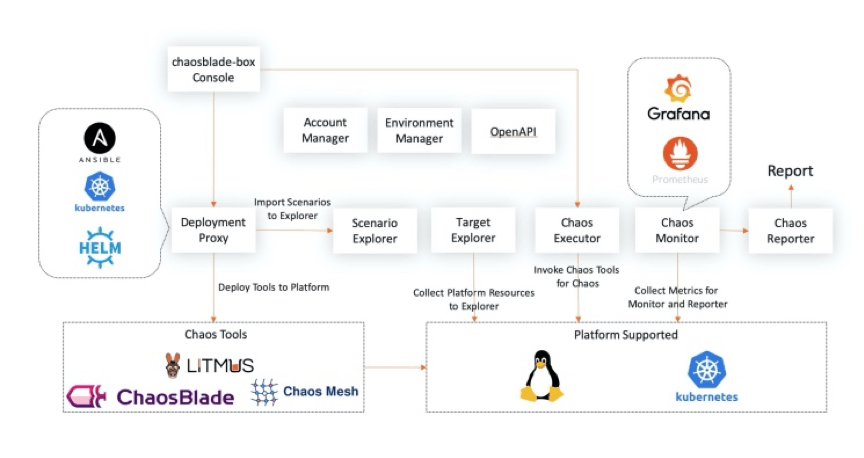 You can use the console page to automate the deployment of managed tools, such as chaosblade and LitmusChaos, and unify the experimental scenarios according to the chaos experimental model established by the community. You can also divide the target resources according to hosts, Kubernetes, and applications and use the target manager to control them. On the experiment creation page, you can select target resources in a visible way. The platform executes experimental scenarios of different tools by calling chaos executor. You can observe the experiment metrics with access to Prometheus monitoring. Rich experiment reports will be provided in the future. The deployment of chaosblade-box is also very simple.

You can see the details on here.

After the installation and deployment are completed, you can configure the Kubernetes cluster or host information to view the cluster or host data on the Machine List page. Click Experiment Management to create the experiment. The drill dimensions include the host, node, pod, and container. After you select the corresponding dimension, the corresponding resource list appears, and you can select it easily. The drill contains all hosted experimental scenarios. After the experiment is created, you are redirected to the drill details page automatically. Click Execute to jump to the task details page.

In the future, the core functions of the Alibaba Cloud fault drill platform (with Advanced Certification of Chaos Engineering Platform in Trusted Cloud) will be open-sourced and integrated with the existing chaos engineering platform to open more capabilities. At the same time, it simplifies the deployment and implementation of chaos engineering tools. In the future, it will host more chaos experimental tools and be compatible with mainstream platforms. This way, it can implement scenario recommendations, provide integrated business and system monitoring, output experimental reports, and complete closed-loop chaos engineering operations on an easy-to-use basis.

Xiao Changjun (Qionggu) is an Alibaba Technical Expert, Founder and Maintainer of the open-source project ChaosBlade, Head of Alibaba Cloud fault drill platform, an expert of Trusted Cloud Standards, and a chaos engineering expert with years of experience in distributed system architecture and stability construction.

Sang Jie works in the R&D Center of Agricultural Bank of China and is engaged in big data R&D in financial-related systems.